Proving, again, that politics makes strange bedfellows, Fillmore asks a favor of Lincoln concerning a nephew in disgrace. In November 1861, Lincoln helped Fillmore’s young kinsman, George M. Fillmore, land a lieutenancy; now, two years later, the ex-President writes to say that Lieutenant Fillmore has been cashiered “for alleged intemperance and inefficiency.” Fillmore explains that his nephew disputes the charges, and can disprove them “if he can be restored so as to have a court of inquiry.”

On the verso of Fillmore’s letter, Lincoln directs the Judge Advocate General to examine and report upon the case. “The young man” he notes succinctly, “is nephew of Ex. President Fillmore.”  The report was duly made – its contents, at this juncture, unknown - and on May 25th, Judge Advocate General Holt received word from Lincoln’s secretary John G. Nicolay, that the President would take no action on matter.
Autograph Endorsement Signed (“A. Lincoln”), 1 page, octavo, on the verso of a 3 page MILLARD FILLMORE Autograph Letter Signed to Lincoln datelined Buffalo, May 16, 1863; no place, May 19, 1863, to the Judge Advocate General, Joseph Holt.
Read More

To his Excellency
Abraham Lincoln,

On the 30th day of November 1861, you honored a nephew of mine, George M. Fillmore with a commission as 2nd Lieut. in the 3rd U.S. Artillery, and on the 28th of February 1862, he was promoted to a 1st Lieutenancy; and after serving in California and New Mexico, he was recently ordered to join his company in S. Carolina, where he had been but a short time when he received an order from your Excellency dismissing him for alleged intemperance and 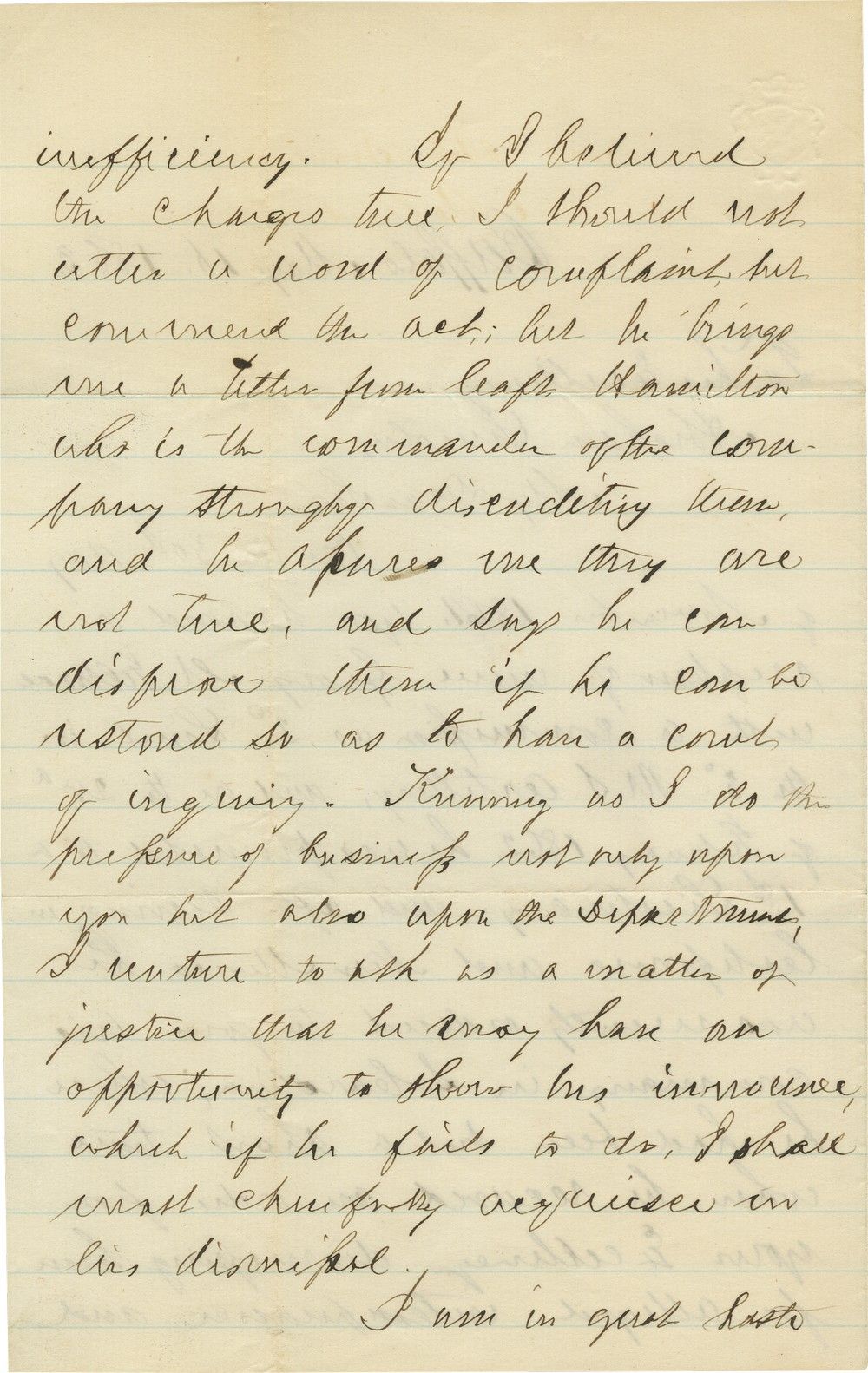 inefficiency. If I believed the charges true, I should not utter a word of complaint, but commend the act; but he brings me a letter from Capt. Hamilton who is the commander of the company strongly discrediting them, and he assures me they are not true, and says he can disprove them if he can be restored so as to have a court of inquiry. Knowing as I do the pressure of business not only upon you but also upon the Departments, I venture to ask as a matter of justice that he may have an opportunity to show his innocence, which if he fails to do, I shall most cheerfully acquiesce in his dismissal.

I am in great haste 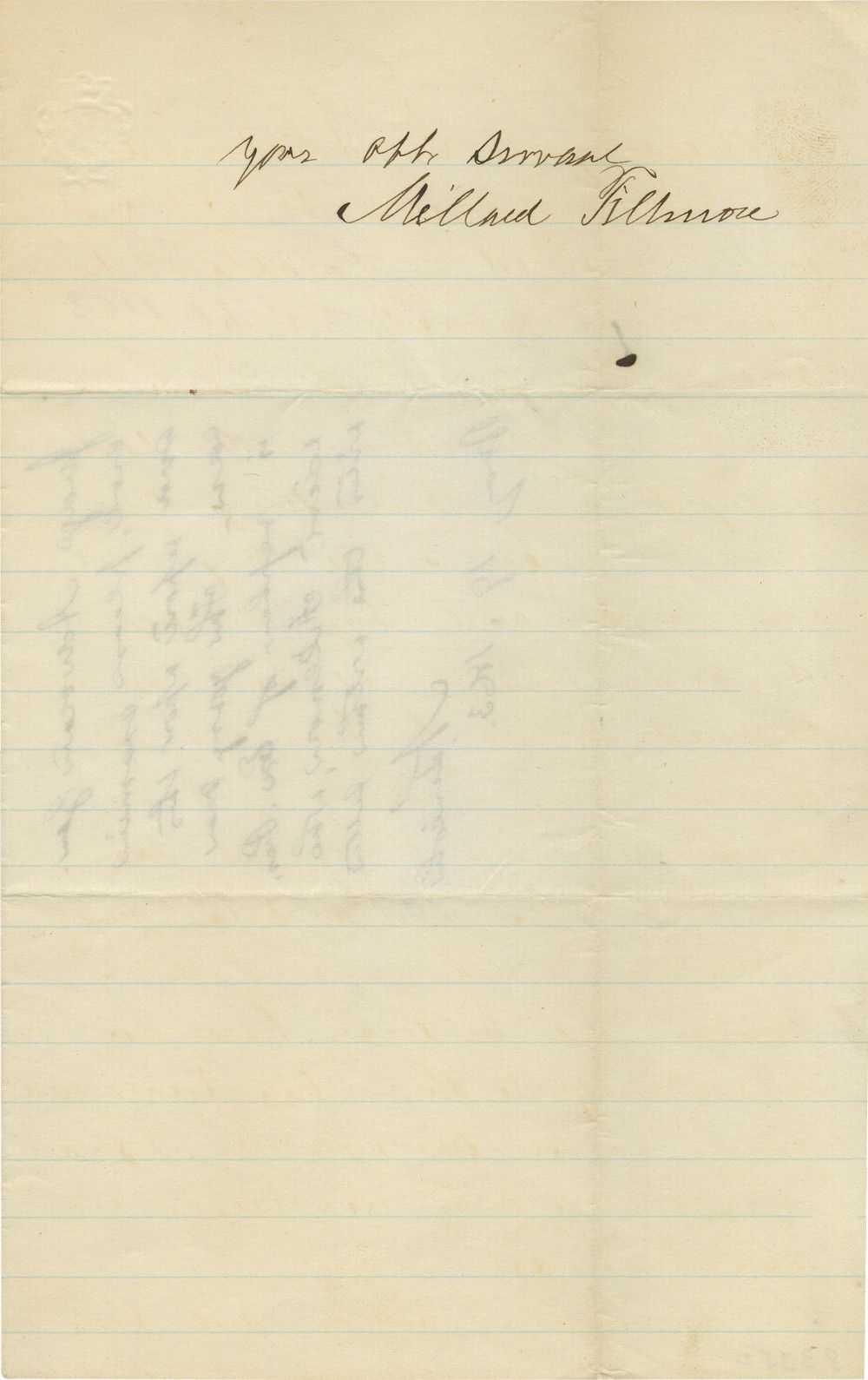 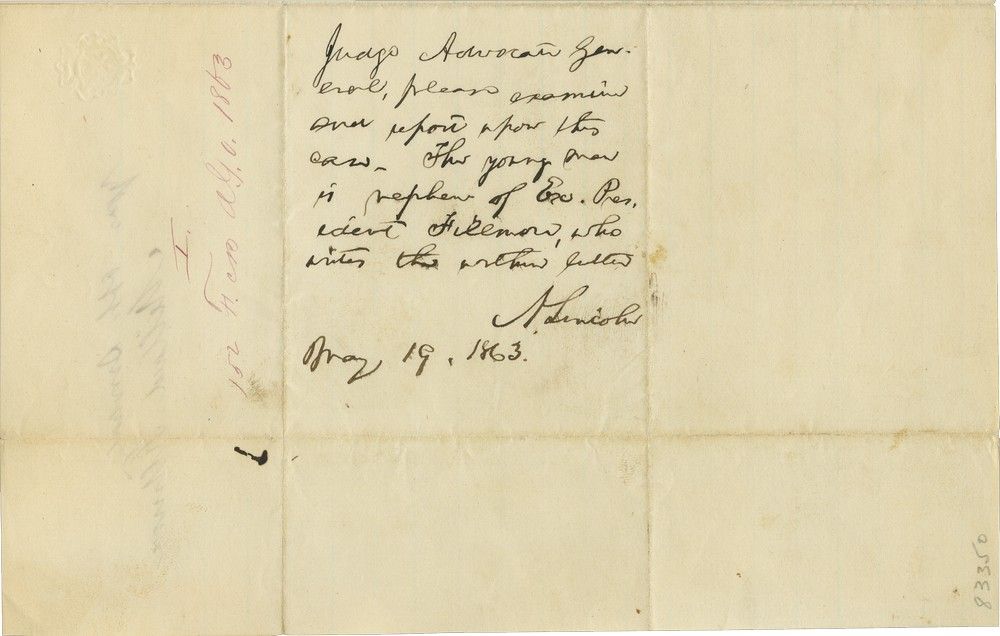 Judge Advocate General, please examine and report upon this case. The young man is nephew of Ex. President Fillmore, who writes the within letter.