If Lincoln was given to saying that, without Stanton, he would be destroyed, it was more than rhetorical excess; for Stanton, more than anyone else in Lincoln's life, worried for his safety, and took pains to secure it. It was Stanton who made sure that cavalry guarded Lincoln on his carriage rides; Stanton who ordered troops encamped on the White House lawn; Stanton who arranged for the police to provide Lincoln constant protection; Stanton who detailed a military escort to accompany Lincoln on his late night walks to and from the War Department; Stanton who surrounded Lincoln with detectives; and Stanton, most of all, who begged Lincoln to take care of himself and became agitated and angry when he did not. It was Stanton, too, who feared that Lincoln’s risk of assassination was never greater than after he had won the war. Not surprisingly, then, when Lincoln telegraphed Stanton from City Point, ten miles outside of Petersburg, that the besieged city had finally fallen and he was hurrying into its smoldering streets, there to stroll with Grant (see Lincoln to Stanton, April 3, 1865, 8:00 a.m.) - it was Stanton who was horrified at the risk. “Allow me respectfully to ask you,” he telegraphed back, “to consider whether you ought to expose the nation to the consequence of any disaster to yourself in the pursuit of a treacherous and dangerous enemy like the rebel army.” But by the time Lincoln received Stanton’s rebuke, he was in no mood for caution. He had just heard that Richmond had fallen too, and elated, was making plans to visit there the following day.  Here he brushes off the Secretary’s dire warning, and casually promises, “I will take care of myself.”

But it was Stanton, and not Lincoln, who correctly gauged the danger: there was killing yet to be done. Lincoln, eleven days later, while gaily taking “care of himself” at Ford’s Theatre, was assassinated.

There was, however, a kind of prescience to Lincoln’s note. He writes, using the phrase, “in our hands,” at another heightened, hard-won, and long-sought moment - his election to the presidency (see Lincoln to Seward, October 12, 1860) - seemingly unconsciously, to denote finality.
Autograph Telegram Signed (“A. Lincoln”), as President, 1 page, quarto.  City Point, [Virginia], 5 p.m., April 3. 1865. To the Secretary of War, Edwin M. Stanton, in Washington D.C.
Used with the permission of Shapell Legacy Partnership.
Read More Yours received. Thanks for your caution; but I have already been to Petersburg, staid [sic] with Gen. Grant an hour & a half and returned here. It is certain now that Richmond is [text is crossed out] in our hands, and I think I will go there to-morrow. I will take care of myself. 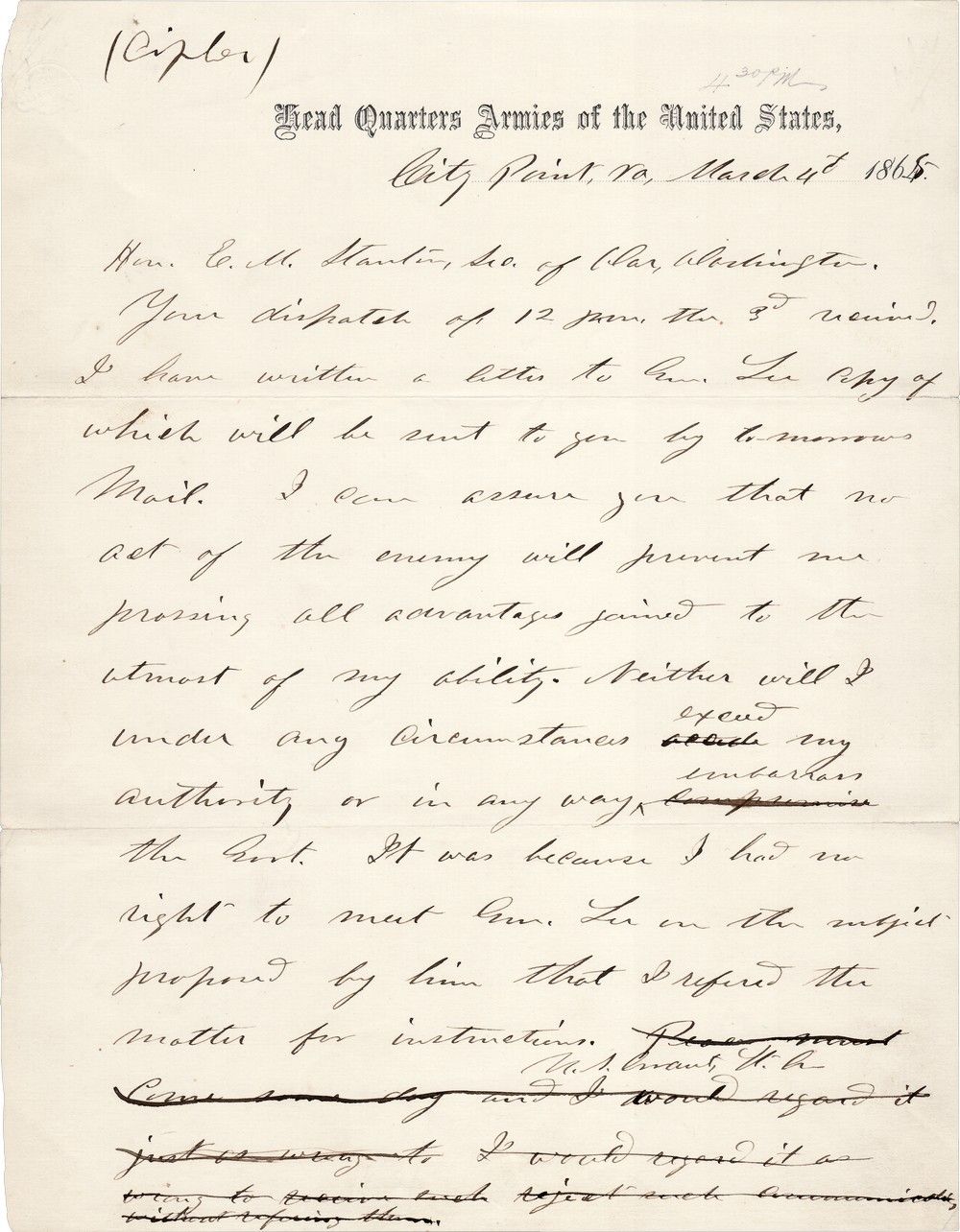